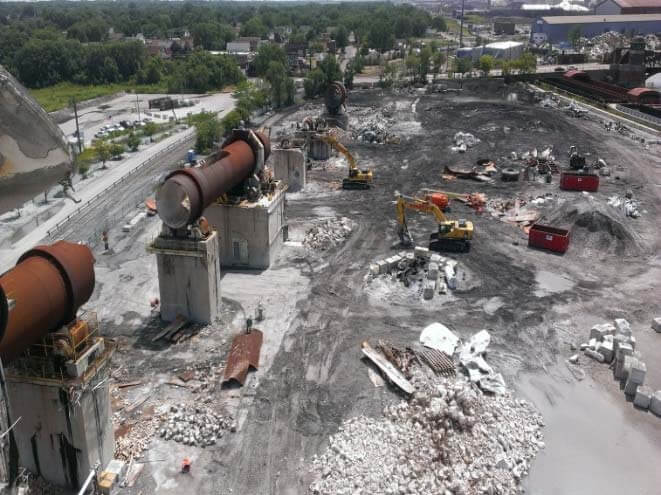 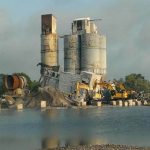 Various production buildings, bins, conveyors and three large lime kilns were demolished over the course of the project. HOMRICH worked closely with Carmeuse to control dust emissions as the site bordered a residential community. As a result, the project was completed without disturbing the neighbors.

In addition, HOMRICH salvaged two large material screeners, a paddle mixer and a grinding mill for the client which were located within production buildings. Other equipment was salvaged and sold for reuse, including a 500-foot-long by 14-foot diameter kiln. HOMRICH was able to provide Carmeuse with a sizeable credit towards the cost of the project by marketing, salvaging, and selling various pieces of equipment.

In total, nearly 20,000 tons of concrete were hauled away from the site. Additionally, HOMRICH was able to recycle over 5,000 tons of scrap metal.

During Phase I of the project, the property was considered an active mining site as Carmeuse was still utilizing portions of the plant.

The project started in December of 2013 and finished on schedule in September of 2014. HOMRICH was required to comply with MSHA safety requirements and HOMRICH completed work at the Carmeuse site with zero accidents or injuries.